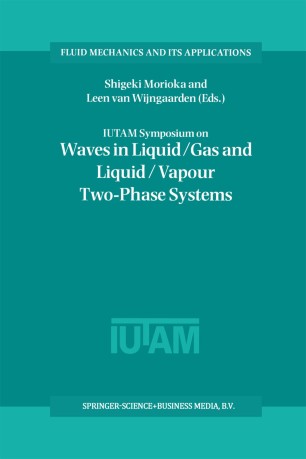 Proceedings of the IUTAM Symposium held in Kyoto, Japan, 9–13 May 1994

Part of the Fluid Mechanics and its Applications book series (FMIA, volume 31)

A IUTAM symposium on 'Waves in Liquid/Gas and Liquid/Vapor Two-Phase Systems' was held in Kyoto, Japan, 9-13 May 1994. Sixty-three scientists partici­ pated coming from ten countries, and forty-two lectures were presented. The list of participants and the program are included in this volume. The symposium was held in response to the request of the participants in the IUTAM symposium 'Adiabatic Waves in Liquid-Vapor System' held at Gottingen in 1989. At that time, the need for another symposium in about five years had been indicated by all the participants. This symposium intends to develop the subject of wave properties in more general liquid-gas two-phase systems. Topics in this symposium may be classified as (1) waves in liquid-gas bubble systems including interfacial effects, (2) waves in gas( vapor )-droplets systems, (3) waves in films or stratified systems, (4) waves with liquid-vapor transition, (5) waves with vapor-liquid transition, (6) wave propagation near the critical point and (7) waves with low pressure effect. As for topic (1), experiments, numerical simulations and analytical approaches to waves in bubly liquids were discussed. The importance of interbubble interactions through the liquid-field is now well established at least in terms of potential theory. There was also a progress concerning the well-posedness of governing equations for void waves. For pressure waves there were some new phenomena, such as bubble­ cluster formation and the occurrence of three-dimensional structures, in addition to a progress from more qualitative studies to quantitative ones.