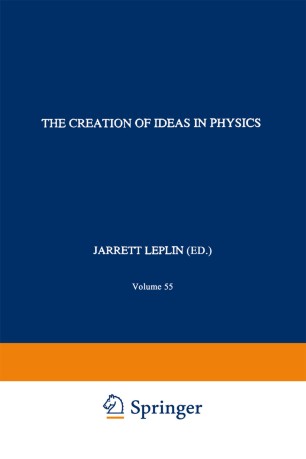 The Creation of Ideas in Physics

Studies for a Methodology of Theory Construction

Part of the The University of Western Ontario Series in Philosophy of Science book series (WONS, volume 55)

The unusual ambition of this volume is to engage scientists, historians, and philosophers in a common quest to delineate the structure of the creative thinking responsible for major advances in physical theory. The topic does not fit anyone discipline's proprietary interests, and can only be pursued cooperatively. This volume was conceived in the hope that the importance of learning something general about how theories are developed and what makes the difference between productive and abortive directions of theo­ retical inquiry could overcome well-known barriers to such cooperation. The volume originated in a conference held at the University of North Carolina, Greensboro in 1988, as an installment of the annual Greensboro Symposium in Philosophy. Most of the papers descend from papers pre­ sented on that occasion. The authors are well known in their own disciplines, but should be identified to the wider audience for interdisciplinary work in science studies. Rafael Sorkin, of Syracuse University, and Don Page, of the University of Alberta, are theoretical physicists who have done research in quantum gravity and cosmology. John Stachel, a physicist at Boston University, is widely known as the Director of the Einstein Project and editor of Einstein's papers. William Harper, a historian of science and philosopher at the University of Western Ontario, is a Newton scholar and specialist in decision theory.