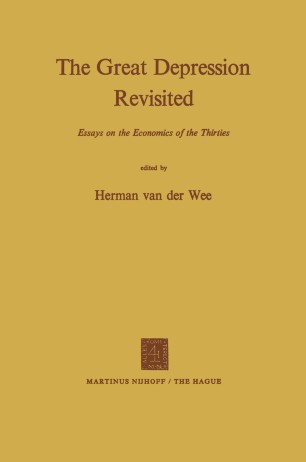 Essays on the Economics of the Thirties

For a quarter of a century the industrial Western world has been living in the euphoria of continuous improvements in welfare, based on economic programming, increasing integration and terms of trade which favor indus­ trial countries and discriminate against agricultural regions. It is true that recessions have periodically recurred during these years : time and again, however, government intervention succeeded in reducing them to mere "in­ ventory cycles". In contrast with the twenties and thirties, when economic policy in the West focused on fighting unemployment and stimulating investment, the postwar period has been characterized by a permanent concern to curb inflationary pressure, which was partly due to full-employ­ ment. The present welfare economy has given rise to a growth of the pro­ pensity to consume such that public policy has often been constrained to limit consumption and stimulate saving. In this new framework it has perhaps been forgotten that today's welfare owes much to the lessons from the past. The bitter world crisis experience of the thirties in particular has exerted a fruitful and decisive influence upon the search for means to prevent, eliminate or soften the cyclical fluctuations which the process of economic growth involves. Forty years after the out­ break of the greatest economic crisis ever, it seems useful to draw up the balancesheet of the lessons learned from it. There exists a large literature about the depression of the thirties.