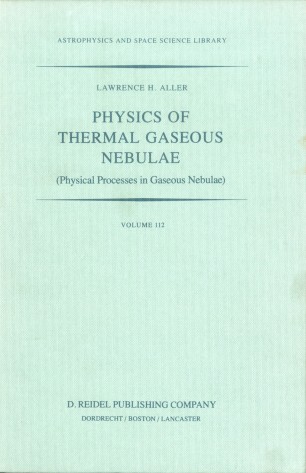 Gaseous nebulae offer outstanding opportunities to atomic physicists, spectroscopists, plasma experts, and to observers and theoreticians alike for the study of attenuated ionized gases. These nebulae are often dusty, heated by radiation fields and by shocks. They are short-lived phenomena on the scale of a stellar lifetime, but their chemical compositions and internal kinematics may give important clues to advanced stages of stellar evolution. The material herein presented is based on lectures given at the University of Michigan, University of Queensland, University of California, Los Angeles, and in more abbreviated form at the Raman Institute, at the Scuola Internazionale di Trieste, and elsewhere. Much of it is derived origionally from the series "Physical Processes in Gaseous Nebulae" initiated at the Harvard College Observatory in the late 1930s. I have tried to emphasize the basic physics of the mechanisms involved and mention some of the uncertainties that underlie calculations of many basic parameters. Emphasis is placed on ionized plasmas with electron temperatures typically in the neighborhood of 10,OOOoK. Dust and other ingredients of the cold component of the interstellar medium are treated briefly from the point of view of their relation to hot plasmas of H II regions and planetaries. Chemical composition determinations for nebulae are discussed in some detail while the last section deals with interpretations of elemental abundances in the framework of stellar evolution and nucleogenesis. Gaseous nebulae offer some particularly engaging opportunities for studies of stellar evolution.