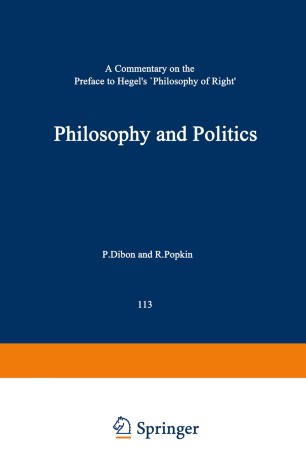 A Commentary on the Preface to Hegel’s Philosophy of Right

There is a didactical as well as a philosophical importance to providing a commentary on the Preface to Hegel's handbook on the philosophy of right. Considering the fact that the text brings us the thought of a great and difficult philosopher in a non-rigorous, "exoteric" way, it is well suited to the task of introducing students to the world of think­ ing. It is, however, too difficult to do this without being supplemented by some explanation. Analysis and hints for further study are necessi­ tated here by both the interweaving of political and philosophical viewpoints and the philosophical presuppositions with which this Preface is full. The philosophical importance of a commentary on Hegel's text can be found partially in the incessant quotation of the Preface in the literature on Hegel's philosophy to justify very different and contra­ dictory interpretations. As long as the specialists do not agree about the meaning of the Preface to the Philosophy of Right, anyone trying to explain it cannot avoid the task of making his or her own contribu­ tion to the philosophical debate concerning the nature and content of Hegel's work.