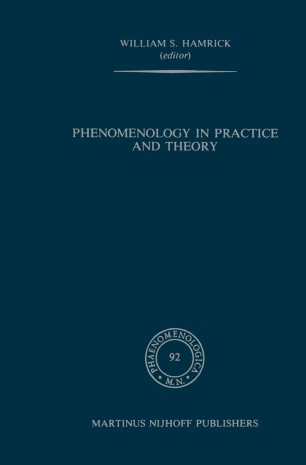 Phenomenology in Practice and Theory

by Wolfe Mays It is a great pleasure and honour to write this preface. I first became ac­ quainted with Herbert Spiegelberg's work some twenty years ago, when in 1960 I reviewed The Phenomenological Movement! for Philosophical Books, one of the few journals in Britain that reviewed this book, which Herbert has jok­ ingly referred to as "the monster". I was at that time already interested in Con­ tinental thought, and in particular phenomenology. I had attended a course on phenomenology given by Rene Schaerer at Geneva when I was working there in 1955-6. I had also been partly instrumental in getting Merleau-Ponty to come to Manchester in 1958. During his visit he gave a seminar in English on politics and a lecture in French on "Wittgenstein and Language" in which he attacked Wittgenstein's views on language in the Tractatus. He was apparently unaware of the Philosophical Investigations. But it was not until I came to review Herbert's book that I appreciated the ramifications of the movement: its diverse strands of thought, and the manifold personalities involved in it. For example, Herbert mentions one Aurel Kolnai who had written on the "Phenomenology of Disgust'!, and which had appeared in Vol. 10 of Husserl's Jahrbuch. It was only after I had been acquainted for some time with Kolnai then in England, that I realised that 2 Herbert had written about him in the Movement. The Movement itself contains a wealth of learning.