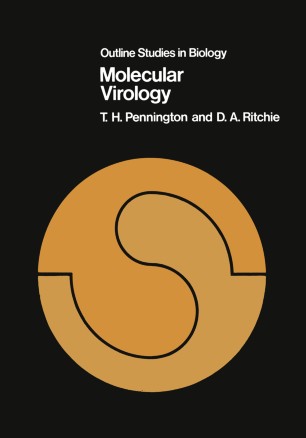 1. 1 Historical development of molecular virology of effort on a limited number of phages, Viruses have occupied a central position in notably the Escherichia coli phages T2 and T4. molecular biology ever since its development as At the same time Lwoff and his colleagues were an independent discipline. Indeed, molecular studying phage A, a temperate phage of E. coli, biology itselflargely developed out of the work which was to lead to equally fundamental pioneer studies of Delbriick, Luria and Hershey, observations on the regulation of macro­ who realized, in the late 1930's, that bacterial molecular synthesis. viruses (bacteriophages, often abbreviated to The study of animal and plant viruses has its phages) had properties which made them origins in the latter half of the 19th century uniquely suitable as a model system for an and was largely initiated by workers in medical, attack on one of the then outstanding problems veterinary and agricultural disciplines. Many of of biology, the definition of the gene in their practical successes owe little to molecular physical and chemical terms. The favourable biology, stemming instead from those properties of these viruses include the rapidity approaches successful in combating other of their growth, their ease of assay, and the parasites, such as vector control and the availability of easily scored genetic markers. breeding of resistant varieties of plants.