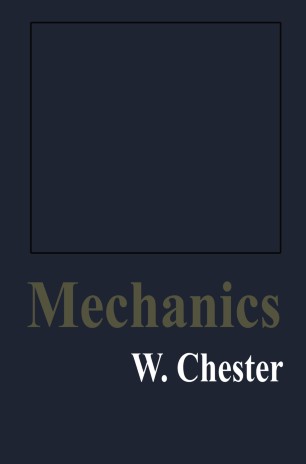 When I began to write this book, I originally had in mind the needs of university students in their first year. May aim was to keep the mathematics simple. No advanced techniques are used and there are no complicated applications. The emphasis is on an understanding of the basic ideas and problems which require expertise but do not contribute to this understanding are not discussed. How­ ever, the presentation is more sophisticated than might be considered appropri­ ate for someone with no previous knowledge of the subject so that, although it is developed from the beginning, some previous acquaintance with the elements of the subject would be an advantage. In addition, some familiarity with element­ ary calculus is assumed but not with the elementary theory of differential equations, although knowledge of the latter would again be an advantage. It is my opinion that mechanics is best introduced through the motion of a particle, with rigid body problems left until the subject is more fully developed. However, some experienced mathematicians consider that no introduction is complete without a discussion of rigid body mechanics. Conventional accounts of the subject invariably include such a discussion, but with the problems restricted to two-dimensional ones in the books which claim to be elementary. The mechanics of rigid bodies is therefore included but there is no separate discussion of the theory in two dimensions.