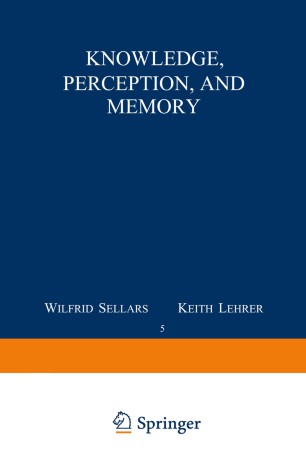 In this book I present what seem to me (at the moment) to be right an­ swers to some of the main philosophical questions about the topics men­ tioned in the title, and I argue for them where I can. I hope that what I say may be of interest both to those who have already studied these ques­ tions a lot and to those who haven't. There are several important topics in epistemology to which I give little or no attention here - such as the nature of a proposition, the major classifications of propositions (neces­ sary and contingent, a priori and a posteriori, analytic and synthetic, general and particular), the nature of understanding a proposition, the nature of truth, the nature and justification of the various kinds of in­ ference (deductive, inductive, and probably others) -but enough is cover­ ed, to one degree or another, that the book might be of use in a course in epistemology. Earlier versions of some of the material in Chapters II, III, and IV were some of the material in Ginet (1970). An earlier version of the part of Chapter VII on memory-connection was a paper that I profited from reading and discussing in philosophy discussion groups at Cornell Uni­ versity, SUNY at Albany, and Syracuse University in 1972-73. I do not like to admit how long I have been working on this book.