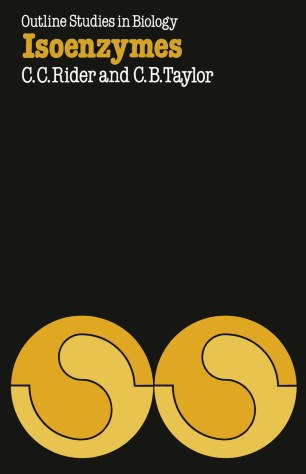 Isoenzymes were 'discovered' 20 years ago and were at first regarded as interesting but rare occurrences. Since then a wealth of information on enzyme heterogeneity has accrued and it now seems likely that at least half of all enzymes exist as isoenzymes. This is important in many areas of biological and medical science. Thus isoenzyme studies have provided the main experimental substance for the neutral drift controversy in genetics and evolution; they have greatly extended our understanding of metabolic regulation not only in animals but also in bacteria and plants; their existence has made available a multitude of highly sensitive markers for the study of differentiation and development, as well as providing indices of aberrant gene expression in carcinogenesis and other pathological processes. Iso­ enzymes are also being used increasingly in diagnostic clinical bio­ chemistry. It is surprising that this phenomenon which affects such a high pro­ portion of enzymes and is clearly important in biochemistry should receive such scant attention in the standard textbooks of that subject, the formal treatment of isoenzymology in these rarely exceeding one or two pages. This may be because the 'pure biochemist' has tended to regard variation in enzyme properties between tissues more as an unwanted complication than as a potential source of insight into diversity of biological function.