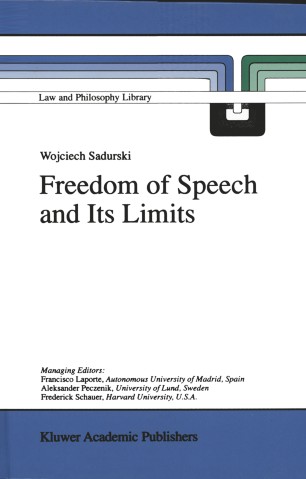 Freedom of Speech and Its Limits

In authoritarian states, the discourse on freedom of speech, conducted by those opposed to non-democratic governments, focuses on the core aspects of this freedom: on a right to criticize the government, a right to advocate theories arid ideologies contrary to government-imposed orthodoxy, a right to demand institutional reforms, changes in politics, resignation of the incompetent and the corrupt from positions of authority. The claims for freedom of speech focus on those exercises of freedom that are most fundamental and most beneficial to citizens - and which are denied to them by the government. But in a by-and­ large democratic polity, where these fundamental benefits of freedom of speech are generally enjoyed by the citizens, the public and scholarly discourse on freedom of speech hovers about the peripheries of that freedom; the focus is on its outer boundaries rather than at the central territory of freedom of speech. Those borderline cases, in which people who are otherwise genuinely committed to the core aspects of freedom of speech may sincerely disagree, include pornography, racist hate speech and religious bigoted expressions, defamation of politicians and of private persons, contempt of court, incitement to violence, disclosure of military or commercial secrets, advertising of merchandise such as alcohol or cigarettes or of services and entertainment such as gambling and prostitution.