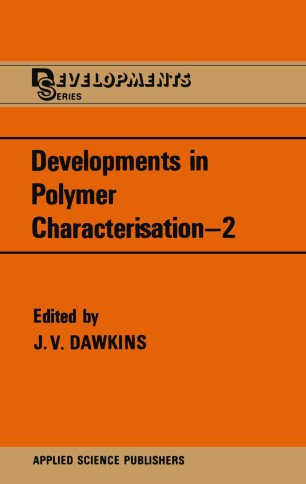 Part of the The Developments Series book series (TDS, volume 2)

The policy adopted in Volume 1 of this series of including a relatively small number of topics for detailed review has been continued here. The techniques selected have received considerable attention in recent years. F or this reason and because of the significance of the characterisation data, further coverage of 13C nuclear magnetic resonance spectroscopy and small angle neutron scattering is given in the first two chapters. In Chapter I a large part of the review describes the determination of monomer sequence distributions and configurational sequences in copolymers formed from more than one polymerisable monomer. The review on neutron scattering (Chapter 2) is directed towards the determination of the chain conformation in semi-crystaIIine polymers, which has provided important results for the interpretation of chain folding and morphology in crystaIIisable polymers. Laser Raman spectroscopy has also been used for morphological studies, and this application together with a description of the theoretical and experimental aspects of the technique is given in Chapter 3. X-ray photoelectron spectroscopy because of its extreme sensitivity to surface characteristics has provided information on polymeric solids that could not be obtained by other techniques. The principles and practice of this ESCA technique, including its use for simple elemental analysis, structural elucidation and depth profiling, are described in Chapter 4. The final two chapters are mainly concerned with the chain conformation of polymers in dilute solution. Ultrasonic techniques (Chapter 5) show pmmise for observing the dynamics of conformational changes.