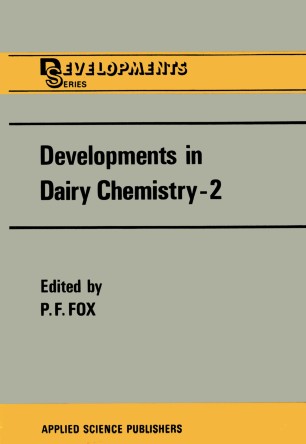 Many of the desirable flavour and textural attributes of dairy products are due to their lipid components; consequently, milk lipids have, tradi­ tionally, been highly valued, in fact to the exclusion of other milk components in many cases. Today, milk is a major source of dietary lipids in western diets and although consumption of milk fat in the form of butter has declined in some countries, this has been offset in many cases by increasing consumption of cheese and fermented liquid dairy products. This text on milk lipids is the second in a series entitled Developments in Dairy Chemistry, the first being devoted to milk proteins. The series is produced as a co-ordinated treatise on dairy chemistry with the objective of providing an authoritative reference source for lecturers, researchers and advanced students. The biosynthesis, chemical, physical and nutritional properties of milk lipids have been reviewed in eight chapters by world experts. However, space does not permit consideration of the more product-related aspects of milk lipids which play major functional roles in several dairy products, especially cheese, dehydrated milks and butter.