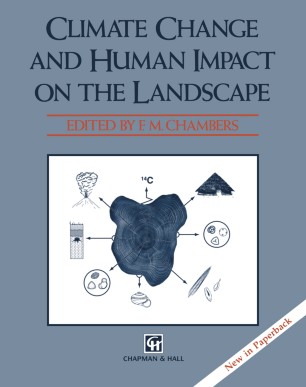 Climate Change and Human Impact on the Landscape

Studies in palaeoecology and environmental archaeology

I am pleased to present this volume of invited reviews and research case studies, produced to mark the retirement of Professor A. G. Smith - one of the leading researchers in Holocene palaeoecology. A. G. Smith took his first degree at the University of Sheffield, graduating in 1951 with a first-class honours degree in Botany. His doctorate was awarded in 1956 for a study in late-Quaternary vege­ tational history, based in the Sub-Department of Quaternary Research at the University of Cambridge, under the supervision of the late Sir Harry Godwin, FRS. He then researched and taught at Queen's University, Belfast, from 1954, leading the Nuffield Quaternary Research Unit there, becoming Co-Director of the Palaeoecology Laboratory from 1964. He was appointed Professor and Head of the Department of Botany (later, Plant Science) at University College, Cardiff, in 1973, and retired from the School of Pure and Applied Biology at the renamed University of Wales College, Cardiff, in August 1991. Although his principal interests have been concerned with the post-glacial environmental history of the British Isles, Professor Smith has significantly in­ fluenced many researchers elsewhere in their interpretation of biological and other evidence for human modification of the natural environment.