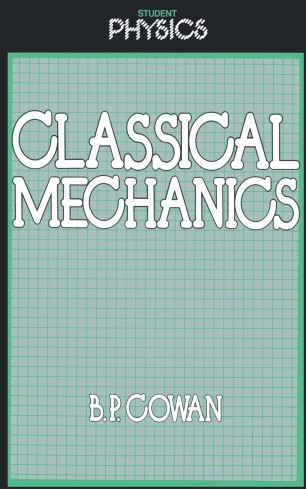 The study of mechanics plays a central role in physics for a whole variety of reasons. It was one of the earliest of the quantitative sciences, and had immediate practical applications. These ranged from the study of the motion of projectiles in warfare to the motion of the planets, predicting the seasons, eclipses, etc. At the present time, even though superseded on the very small scale by quantum theory and on the very large scale by the theory of relativity, the mechanics of Newton is perfectly adequate for treating a wide spectrum of problems from the • '"etic theory of gases to the motion of space vehicles. Furthermore, the science of mechanics is regarded by many as the epitome of a good scientific theory and for this reason is studied by philosophers and social scientists alike as an exemplar of the 'scientific method'. We shall commence in Chapter 1 with a brief historical outline of the development of mechanics, mentioning the names and dates of the main participants and summarizing their contributions. Preface vii Chapter 1 Newton's laws 1. 1 Historical introduction Primitive ideas about mechanics were exemplified by the state­ ments of Aristotle (384-322 Be), who asserted that a force was necessary to maintain motion. Furthermore, he believed that there were different laws for heavenly and earthly bodies.