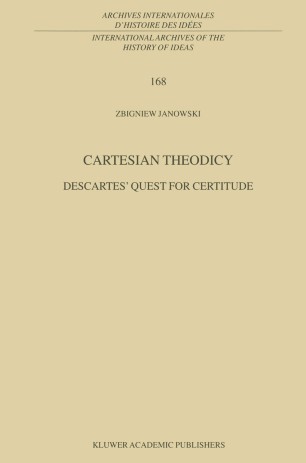 Almost all interpreters of Cartesian philosophy have hitherto focused on the epistemological aspect of Descartes' thought. In his Cartesian Theodicy, Janowski demonstrates that Descartes' epistemological problems are merely rearticulations of theological questions. For example, Descartes' attempt to define the role of God in man's cognitive fallibility is a reiteration of an old argument that points out the incongruity between the existence of God and evil, and his pivotal question `whence error?' is shown here to be a rephrasing of the question `whence evil?' The answer Descartes gives in the Meditations is actually a reformulation of the answer found in St. Augustine's De Libero Arbitrio and the Confessions. The influence of St. Augustine on Descartes can also be detected in the doctrine of eternal truths which, within the context of the 17th-century debates over the question of the nature of divine freedom, caused Descartes to ally himself with the Augustinian Oratorians against the Jesuits. Both in his Cartesian Theodicy as well as his Index Augustino-Cartesian, Textes et Commentaire Janowski shows that the entire Cartesian metaphysics can - and should - be read within the context of Augustinian thought.