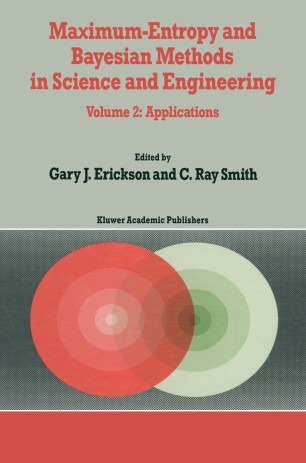 Maximum-Entropy and Bayesian Methods in Science and Engineering

This volume has its origin in the Fifth, Sixth and Seventh Workshops on "Maximum-Entropy and Bayesian Methods in Applied Statistics", held at the University of Wyoming, August 5-8, 1985, and at Seattle University, August 5-8, 1986, and August 4-7, 1987. It was anticipated that the proceedings of these workshops would be combined, so most of the papers were not collected until after the seventh workshop. Because most of the papers in this volume are in the nature of advancing theory or solving specific problems, as opposed to status reports, it is believed that the contents of this volume will be of lasting interest to the Bayesian community. The workshop was organized to bring together researchers from different fields to critically examine maximum-entropy and Bayesian methods in science and engineering as well as other disciplines. Some of the papers were chosen specifically to kindle interest in new areas that may offer new tools or insight to the reader or to stimulate work on pressing problems that appear to be ideally suited to the maximum-entropy or Bayesian method. These workshops and their proceedings could not have been brought to their final form without the support or help of a number of people.