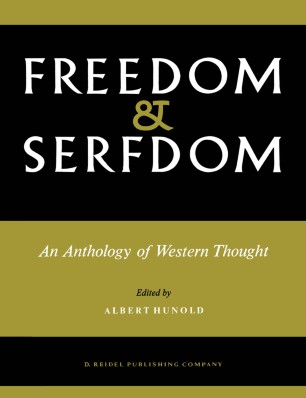 An Anthology of Western Thought

caused in the western camp. A further factor which operates to our disadvantage is the fact that in our democracies the role played by the mass of uprooted humanity is becoming increasingly important, and the problem of control and guidance of the masses still seems to be far from being solved. To all these burning questions an answer is given in this volume, Freedom and Serfdom, which contains a selection from the best contributions of world-renowned social economists, sociologists, philosophers and exponents of the political sciences, published for the first time in the English language. It is at this very moment that a work such as this, dedicated to the moral and intellectual struggle against communism and an analysis of our own democratic institu­ tions, is of particular and urgent importance. For it is imperative, surely, that we should use to the best possible advantage the relatively short time vouchsafed us by the sobering effects of the Paris con­ ference, before our opponents succeed once again in lulling us into a sense of complacent security. The purpose of this volume is not only to make a contribution towards the scientific clarification of some of the burning problems of the age, but also to instil a sense of urgency and vigilance, particularly in the younger generation, and to imbue them with courage and an eager readiness to fight for the ideals of the western world.