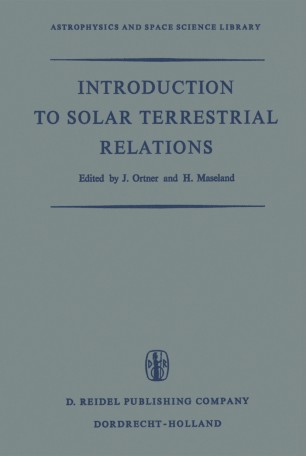 Proceedings of the Summer School in Space Physics Held in Alpbach, Austria, July 15–August 10, 1963 and Organized by the European Preparatory Commission for Space Research (COPERS)

TO SOLAR TERRESTRIAL RELATIONS PROCEEDINGS OF THE SUMMER SCHOOL IN SPACE PHYSICS HELD IN ALPBACH, AUSTRIA, JULY 1S-AUGUST 10,1963 AND ORGANIZED BY THE EUROPEAN PREPARATORY COMMISSION FOR SPACE RESEARCH (COPERS) Edited by J. ORTNER European Space Research Organisation. Paris and H. MAS ELAND Sterrewacht ' Sonnenborgh' • Utrecht D. REIDEL PUBLISHING COMPANY DORDRECHT-HOLLAND e-ISBN-13:978-94-010-3590-3 IS8N-13:978-94-0 10-3592-7 00110. 1007/978-94-010-3590-3 '96' Softoover reprint of the hardcover 1st edition 1965 All rights reserved No part of this book may be reproduced in any fonn. by print, photoprint, microfilm, or any other means without permission from the publisher FOREWORD The textbook presented in the following is composed of the proceedings of the Summer School in Space Physics held during the summer months of 1963. This Summer School was organized by the Preparatory Commission (COPERS) of the European Space Research Organisation (ESRO). It was the first time that such a summer course was held in Europe on a subject of space physics. Thanks to an invitation from the Austrian Government these lectures were given in the College House of Alpbach, Tyrol. Eight outstanding European scientists each presented five two-hour lectures on topics covering the region between the Sun and the Earth. The courses contained the physics of the Sun, the Interplanetary Medium and Trapped Radiation, the Ionosphere and High Latitude Phenomena. Furthermore, a course on space instrumentation was given. Sixty students were selected to attend the courses.