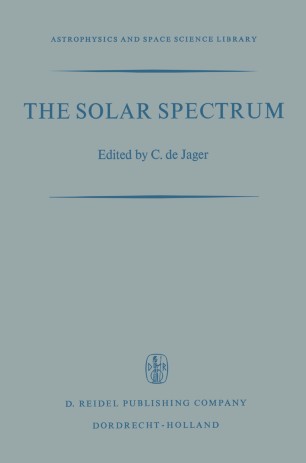 A good deal of our information on solar physics and on solar phenomena is derived from the solar spectrum. A quantitative interpretation of this spectrum was only possible after 1920, after the establishment of Bohr's atomic model, the discovery of Saha's law, and the development of spectrophotometry. The resolving and light gathering powers of our instruments have greatly increased since. We have seen an enormous progress in our theoretical under­ standing of basic atomic phenomena, and of the intricate problems concerned with the transfer of energy through a complicated structure like the sun's outer layers. In particular the observable part of the solar spectrum tremen­ dously enlarged since the introduction, in the years after 1945, of radio­ astronomy, enabling us to study the solar spectrum between wavelengths of some mm to about 15 m, of space research, giving access to the whole electro­ magnetic spectrum below 3000 A, down to about 0. 01 A. Further, the low and high energetic components of the solar particles spectrum have been dis­ covered with space probes (the solar wind), rockets, balloons (the so-called sub­ cosmic-ray particles) and cosmic ray monitors (solar cosmic ray bursts). The extreme wealth of this spectrum, much vaster in extent than the earlier investigators could only dream of, is an important source of information. It looked appropriate to us, after the rapid development of this branch of science,' to invite the world's leading solar physicists to Utrecht for a summa­ rizing symposium on the whole solar spectrum.