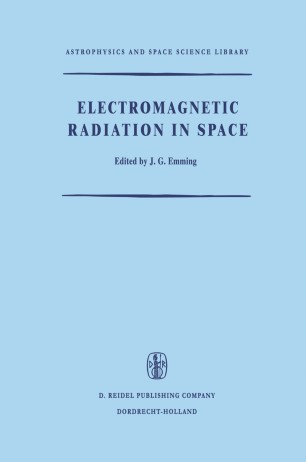 Proceedings of the Third ESRO Summer School in Space Physics, Held in Alpbach, Austria, from 19 July to 13 August, 1965

The subject of this volume in the Astrophysics and Space Science Library is Electro­ magnetic Radiation in Space. It is essentially based on the lectures given at the third ESRO Summer School which was held from 19 July to 13 August, 1965, in Alpbach, Austria. Fifty-eight selected students attended the courses representing the following countries: Austria (2), Belgium (1), Denmark (1), France (12), Germany (10), Italy (7), Netherlands (2), Spain (4), Sweden (6), Switzerland (3), United Kingdom (9), United States (1). Thirteen lectures courses and nine seminars were given by sixteen different scientists in total. In this book the courses and seminars have been classified in three parts according to the kind of radiation which they mainly deal with: Ultraviolet Radiation, X­ Radiation and Cosmic Radiation. These parts can be broken down further in theo­ retical and observational aspects, whereas in the first and second part solar as well as stellar ultraviolet- and X-radiation can be distinguished. * Due to various reasons the publication of this volume had to be delayed; it was therefore judged appropriate to bring the text up to date. The various lecturers have been asked to revise the manuscripts and to eventually add new information which has been acquired in this rapidly evolving field of space astrophysics. Most authors have responded positively to this request, some even have completely rewritten the manuscript.