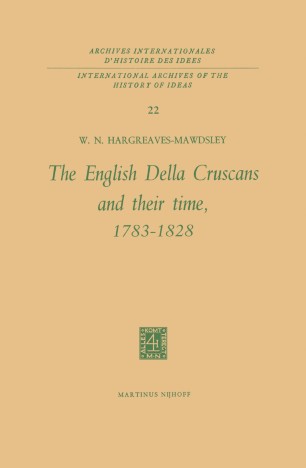 The English Della Cruscan School, although its nucleus was formed in 1785 by the publication of The Florence Miscellany, existed neither in the consciousness of the group which formed it nor in that of the pu blic until it was so dubbed as a term of reproach by William Gifford in his bitter satire The Baviad (1791). As has already been mentioned Merry, the leader of the group, claimed to be a member of the Real Accademia Fiorentina which had swallowed up the Crusca and the two other Floren­ tine Academies in 1783; but it was not until the summer of 1787, when during his lingering voyage of return to England he began to send his contributions signed "Della Crusca" to the World, that the name became publicly known or even employed by his friends. Merry uses it of himself in a letter to Mrs. Piozzi after his arrival in England, on 27th February, 1788. 1 His public avowal of his romantic yearning after the suppressed Accademia della Crusca appears on the title-page of his Paulina (1787); for whereas on the title-page of Robert Manners (1785) he for the first time calls himself "A Member of the Royal Academy of Florence," the author of Paulina, "Robert Merry, Esq.