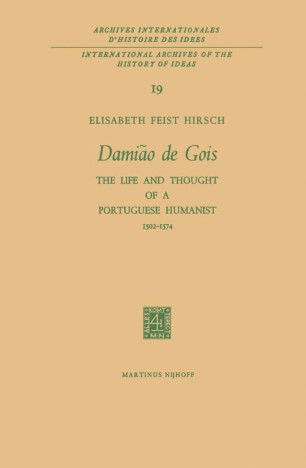 Scholars have given relatively little attention to sixteenth-century Portuguese humanism, although Portugal's vital influence on the humanistic thirst for learning has been readily acknowledged. Through her heroic explorations of distant lands and dangerous sea routes, Portugal infected many humanists with the excitement of discovery, none more than Damiao de Gois, Portuguese student of history. Gois, although generally little known, was - in his life and finally as a victim of the Inquisition in Portugal - thoroughly representative of the course of sixteenth-century Erasmian humanism in Portugal; in addition he deserves recognition in his own right as a contributor to modern historiography. Portugal's explorations and the atmosphere of passion for discovery that prevailed in Lisbon had as strong an influence on Gois during his early years as that of the school of Erasmus, the "prince of humanists" who was eventually to become his personal friend and guide. Gois's two great chronicles of the Portuguese kings John II and Ma­ nuel I culminated a life spent as diplomat, composer, art collector, articulate pleader for religious tolerance, and scrupulous student of history. A factual report of Gois's life - in the main outlines accurate but not complete - exists in Portuguese, and a short resume of his life has been published in English, but so far no full study has been available in any language.