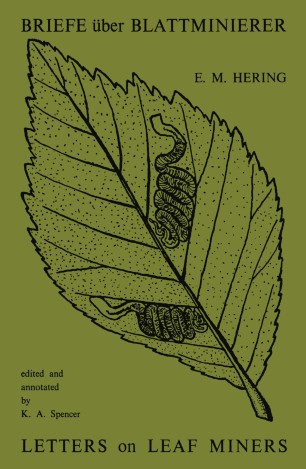 My association with Prof. Hering extends over the past seventeen years, and during this period I have visited him at his home on more than forty occasions and received over 300 letters from him. These letters contain much detailed entomological information. They also throw considerable light on Prof. Hering's personality and character and the background against which he worked. The publication of at least part of these letters as a final tribute to Prof. Hering has been in my mind for many years. This original idea has now been somewhat extended by the inclusion of a number ofletters to Dr. H. Buhr, Dr. J. Klimesch, Dr. F. Groschke and G. C. D. Griffiths, all of whom shared Prof. Hering's interest in leaf-miners. Although Dr. Buhr is primarily a botanist, with Hering's encour­ agement he has taken an active interest in leaf-miners throughout his career and his remarkable collecting becomes apparent from Hering's letters to him. For many years Prof. Hering has written between two and three thousand letters annually. It has obviously been possible to consider here only a very small proportion of these. From many of the longer letters only isolated paragraphs have been included. Use of italics in the letters was not entirely consistent and has been reproduced as used by Prof. Hering. Selection of the letters has been based primarily on their entomolo­ gical interest but numerous passages have also been included illustra­ ting in some way Hering's personal qualities.