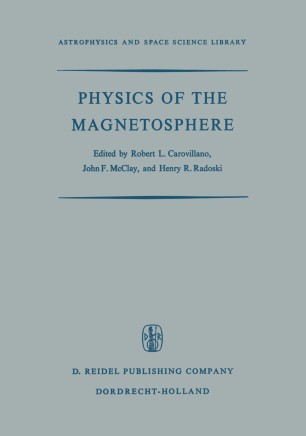 Physics of the Magnetosphere

Based upon the Proceedings of the Conference Held at Boston College June 19–28, 1967

This monograph is based upon the proceedings of the Summer Institute, Physics of the Magnetosphere, held on the Boston College campus, lune 19-28, 1967. The pro gram consisted of invited speakers selected by the Editors. An attempt was made to provide comprehensive treatment of all topics of primary relevance to magneto­ spheric physics, but, of course, some areas received greater coverage than others. The first portion of the conference consisted of tutoriallectures, four each, by five distinguished scientists, and these are presented in Part I of the monograph. The artides appearing in Part I were prepared by the Editors from tapes of the actual lectures. Preliminary manuscripts were prepared and each tutoriallecturer was given the opportunity to make changes or improvements that were incorporated into the final manuscript. H. R. Radoski prepared the lectures of Professor Helliwell; 1. F. McClay prepared the lectures of Professor Dessler and the first two of Professor Dungey; and the remaining lectures of Professors Dungey, Parker, and Van Allen were prepared by me. An effort was made for the most part to write each manuscript in the style of the lectures, but the incongruities of spoken English and the number of scribes in the kitchen undoubtedly limited our success. Everyone knows that English is written far better than it is spoken, although for some reason the spoken word is more dear.