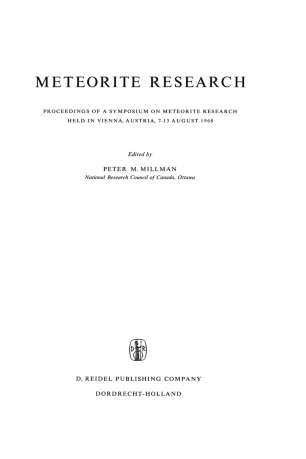 Proceedings of a Symposium on Meteorite Research Held in Vienna, Austria, 7–13 August 1968

The Symposium 'Meteorite Research' was conceived originally at the second meeting of the UNESCO Working Group on Meteorites, held in Paris October 18-20, 1965, under the chairmanship of Professor J. Orce!' In addition to the Chairman the fol­ lowing were present: Dr. G. Harbottle, Dr. M. H. Hey, Dr. B. H. Mason, Dr. P. M. Millman, Professor K. I. Sztr6kay. Dr. E. M. Fournier d'Albe represented the UNESCO Secretariat. Recommendation No.4 from the minutes of this meeting reads as follows: "The Working Group, in view ofthe need to strengthen international co-operation in meteorite research, asks that the International Atomic Energy Agency be requested to consider the possibility of organizing, in 1968, an interdisciplinary conference on meteorites, in collaboration with UNESCO and the appropriate international scientific organizations." After approval in principle of this recommendation had been secured from various international agencies and unions, plans for the symposium were consolidated at the third and final meeting of the Working Group, held in Paris October 12-14, 1966, the members in attendance being the same as for the second meeting.