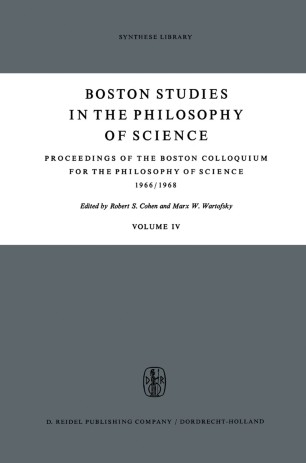 Part of the Boston Studies in the Philosophy of Science book series (BSPS, volume 4)

The fourth volume of Boston Studies in the Philosophy of Science consists mainly of papers which were contributed to our Colloquium during the past few years. The volume represents a wide range of interests in contem­ porary philosophy of science: issues in the philosophy of mind and of language, the neurophysiology of perceptual and linguistic behavior, philosophy of history and of the social sciences, and studies in the fun­ damental categories and methods of philosophy and the inter-relation­ ships of the sciences with ethics and metaphysics. Papers on the logic and methods of the natural sciences, including biological, physical and mathematical topics appear in the fifth volume of our series. We have included in the present volume the first English translation of the classic and fundamental work on aphasia by Carl Wernicke, together with a lucid and appreciative guide to his work by Dr. Norman Geschwind. The papers were not written to form a coherent volume, nor have they been edited with such a purpose. They represent current work-in­ progress, both in the United States and in Europe. Although most of the authors are philosophers, it is worth noting that we have essays of philosophical significance here written by a sociologist, an anthropologist, a political scientist, and by three neurophysiologists. We hope that collaboration among working scientists and working philosophers may develop further.