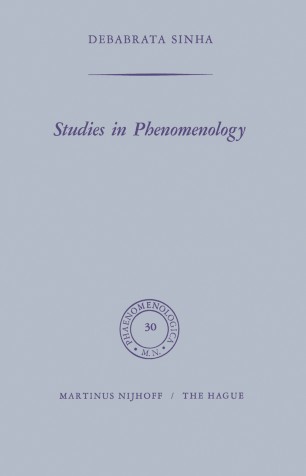 The book is the result of my preoccupation with the phe­ nomenological philosophy of Edmund Husserl during my years of post-doctoral studies (approximately since 1960). As the titles of the chapters may suggest, I have dealt with a number of topics relating to Husserlian Phenomenology - themes which are relatively independent but not disconnected. For I have been prone to look upon this movement as presenting more an organic outlook of its own, inspite of its diversity of phases, than as offering certain answers to individual philosophical problems. Accordingly my aim here has been to interpret the meaning and significance of this outlook in its logical, epistemological and metaphysical aspects. In writing these chapters I have been aware of the fact that the phenomenological movement as such still represents some­ thing of a heterodoxy in the world of Anglo-American philosophy to-day. Yet the points of contact between the two are not far­ fetched. In treating the problems from the phenomenological point of view, I have often taken into account the views of the empirical-analytical school in general. It should be clear that instead of confining myself to a bare exposition of the different aspects of Husserlian Phenomenology, I have taken some freedom in interpreting its point of view.