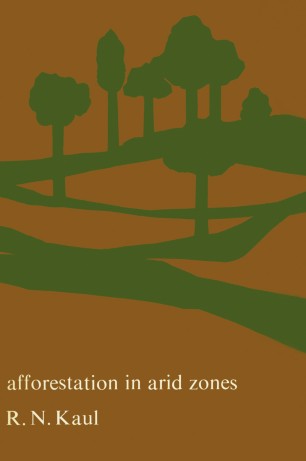 The increasing world population is already causing intensive pressure on the most productive areas of the earth's surface. Hopes of improved living standards, if realised, will increase the pressure still further. The need to make better use of less productive areas thus becomes an urgent priority for human endeavour. In this respect, the arid and semi-arid regions of the world, occupying about 11,000 million acres or 4,500 million hectares, roughly one third of the tota11and surface, pose a constant challenge to man's technological skill. Though the possibilities of economic use of the real deserts are inherently limited, there remain vast areas with less extreme conditions where sustained research is capable of yielding substantial gains in pro­ ductivity. The problem is so large that it can be solved only by the coordinated efforts of workers in many countries and many disciplines. Forestry has a special part to play, not only for its potential value for wood production but still more for the beneficial effects of shelter from desiccating winds which so commonly accompany arid conditions. Mr. KA UL is to be congratulated on his initiative to pool the results of research on afforestation in arid zones in many parts of the world, and to present them in a single volume in the form of separate monographs.