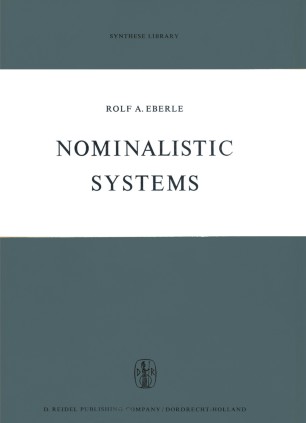 1. 1. PROGRAM It will be our aim to reconstruct, with precision, certain views which have been traditionally associated with nominalism and to investigate problems arising from these views in the construction of interpreted formal systems. Several such systems are developed in accordance with the demand that the sentences of a system which is acceptable to a nominalist must not imply the existence of any entities other than individuals. Emphasis will be placed on the constructionist method of philosophical analysis. To follow this method is to introduce the central notions of the subject-matter to be investigated into a system governed by exact rules. For example, the constructionist method of investigating the properties of geometric figures may consist in formulating a system of postulates and definitions which, together with the apparatus of formal logic, generates all necessary truths concerning geometric figures. Similarly, a constructionist analysis of the notion of an individual may take the form of an axiomatic theory whose provable assertions are just those which seem essential to the role played by the concept of an individual in system­ atic contexts. Such axiomatic theories gain in interest if they are supple­ mented by precise semantical rules specifying the denotation of all terms and the truth conditions of all sentences of the theory.