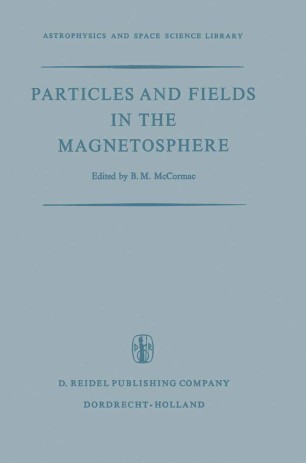 Particles and Fields in the Magnetosphere

Proceedings of a Symposium Organized by the Summer Advanced Study Institute, Held at the University of California, Santa Barbara, Calif., August 4–15, 1969

This book contains the lectures presented at the Advanced Study Institute, 'Earth's Particles and Fields, 1969', which was held at the University of California, Santa Barbara, during the period August 4 through 15, 1969. One hundred seventy persons from twelve different countries attended the Institute. The authors and the publisher have made a special effort for rapid publication of an up-to-date status of the particles and fields in the earth's magnetosphere, which is an ever changing research area. Special thanks are due to the lecturers for their diligent preparation and excellent presentations. The individual lectures and the published papers were deliberately limited; the author's cooperation in conforming to these specifications is greatly appreciated. The contents of the book are organized by subject area rather than in the order in which papers were presented during the Institute. Many thanks are due to Drs. Kinsey Anderson, Sam Bame, Leverett Davis, Gilbert Mead, Harry Elliot, Kenneth Behannon, Reimar Lust, A. W. Schardt, Carl-Gunne Eilthammar, and Martin Walt who served as session chairmen during the Institute and contributed greatly to its success by skillfully directing the discussion period in a stimulating manner after each lecture. Dr. Martin Walt and the Summary Panel worked hard to prepare an excellent summary of various aspects of particles and fields in the magnetosphere at the end of the Institute.