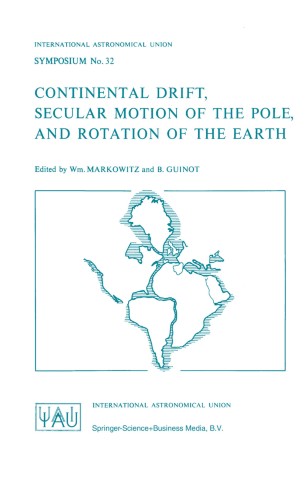 Continental Drift, Secular Motion of the Pole, and Rotation of the Earth

AGU American Geophysical Union BIH Bureau International de l'Heure FAGS Federation of Astronomical and Geophysical Services lAG International Association of Geodesy IAU International Astronomical Union ICSU International Council of Scientific Unions ILS International Latitude Service IPMS International Polar Motion Service International Union of Geodesy and Geophysics IUGG PZT Photographic Zenith Tube UNESCO United Nations Educational, Scientific and Cultural Organization INTRODUCTION The hypothesis of continental drift has become of increasing interest to geophysicists in recent years. The IUGG Upper Mantle Committee has stated that the hypothesis of continental drift envisages horizontal displacements of the continents over th- sands of kilometers, and that it is a principal objective of the Upper Mantle Project to prove whether or not continental drift has occurred. The origin of the hypothesis may be traced to the close similarity in outlines of the coasts on the two sides of the Atlantic Ocean. The theory that the eastern and western hemispheres are drifting apart was expounded in particular by A. Wegener. Modern geophysical theories seek to explain paleomagnetic observations by - suming that two things have occurred in the past: (a) large-scale polar wandering, and (b) continental drift. A direct confirmation of drift, if it exists, is greatly desired. Attempts have been made to prove that continental drift has occurred from - served changes in latitude and longitude. It was thought by some, in fact, that such changes had been detected.