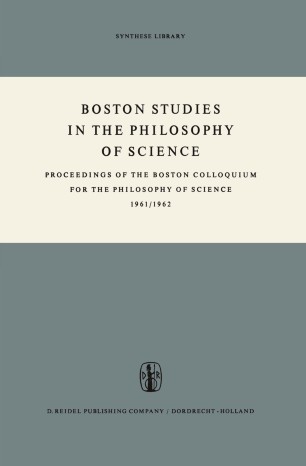 Part of the Boston Studies in the Philosophy of Science book series (BSPS, volume 1)

The broad range of interdisciplinary concerns which are encompassed by the philosophy of science have this much in common: (I) they arise from reflection upon the fundamental concepts, the formal structures, and the methodology of the sciences; (2) they touch upon the characteristically philosophical questions of ontology and epistemology in a unique way, bringing to traditional conceptions the analytic apparatus of modern logic, and the new content and conceptual models of active scientific investigations. These sources are reflected in the present volume, which consists of the major portion of the papers presented to the Boston Colloquium for the Philosophy of Science in the academic year 1961-1962. There is no central theme nor any dominant approach in this colloquium. Initiated in 1960 as an inter-university interdisciplinary faculty group, the Colloqnium is intended to foster creative and regular exchange of research and opinion, to provide a forum for professional discussion in the philosophy of science, and to stimulate the development of academic programs in philosophy of science in the colleges and universities of metropolitan Boston. The base of the Colloquium is our philosophic and scientific community, as broad and heterodox as the academic, cultural and techno­ logical complex in and about this city. The Colloquium has been supported in its first full year, as an inter-institutional cooperative association, by a generous grant to Boston University from the U. S. National Science Foundation. We are most grateful for this help.