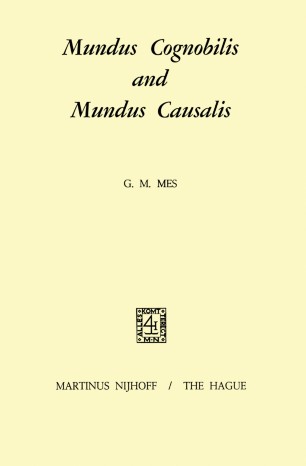 In recommending a book like this, one is tempted to fall back on cliches such as 'brilliant insights', 'original perspectives', etc. The origina­ lity of this book is on a different plane. The problem of subject and object has been central to Western philo­ sophic thinking at least since the time of Descartes. So much so that many students of philosophy see it as the philosophical problem. In his Mundus Cognobilis and Mundus Causalis Mr. Mes offers an ontological-epistemological view, the originality of which consists precisely in the fact that it is not an innovation. Rather, it seeks to put 'in order' the elements already at hand in such a way as to show the subject-object paradox to be non-existent where it seems to be significant and trivial where it really does occur. He has a new and interesting perspective both on what 'materialism' might mean and on how a 'scientific' view of the world has to be constructed. 'Energy-patterns' emerge as explanatory ulti­ mates, although there is no effort to arrive at any sort of ultimate meta­ physics.