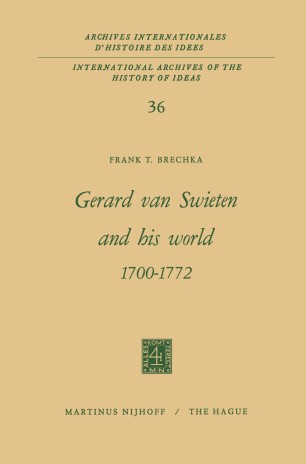 QU ALITIES, QUERIES, AND REPUTE Holland has bred its share of remarkable men and Gerard van Swieten was one of them. Raised in Leiden by fairly prosperous Catholic parents, educated at Louvain and Leiden, acknowledged as one of the most gifted pupils of the famed scientist Herman Boerhaave, and an eminent doctor in his native city for many years, he became chief physician at the Court of Vienna, director of the Imperial Library, head of both the Vienna Medical Faculty and the Censorship Commission, and trusted councillor of the Empress Maria Theresa. There is a short street in Leiden that presently honors his name and his figure is one of those surrounding the Empress on her imposing memorial in Vienna. What sort of man was this who travelled so far? What achievements, what qualities deserve such remembrances? Why a study of his life? Gerard van Swieten worked no miracles. He accomplished no "diplo­ matic revolution," commanded no victorious army, helped to change no political boundary, wrote no literary masterpiece, proposed no radically new or notable scientific theory. More of an organizer than an innovator, more of an administrator than an orginator, he was content to compile, to put together, to comment upon, to explain the discoveries of others and to manipulate the given situations presented to him. He seldom initiated. He followed through.