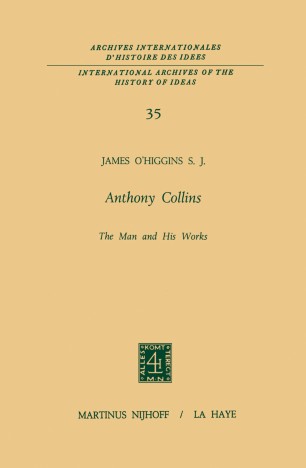 Anthony Collins The Man and His Works

This book is the study of a man who caught my interest both because of his own character and of the variety of his activities. It is an attempt to see him in his relationship, intellectual and literary, with the Europe of his day, to gauge his position in the development of Seventeenth and Eighteenth century thought, to examine the origins of his ideas and their effect and to place him in the social context of the England of the early Eighteenth century. The period in which he lived, coming at the beginning of the Enlightenment, was seminal for our own world and the man himself is of contemporary significance because of the similarity of his outlook, ifnot of his beliefs, to that of many today. He was at the centre of the major theological controversy of the Seventeen­ twenties and was one of the most contentious figures of his time. I would like to acknowledge my obligation to the scholars and librarians who have assisted me in producing this work: to Dr. E. A. O. Whiteman of Lady Margaret Hall, Oxford, and to Mrs. M. Kneale, late of the same College; to Bodley's librarian Dr. R. Shackleton; to Dr. D. Rogers, Mr. D. G. Neill and to the staff of the Bodleian, especially those who work in Duke Humphrey; to the librarians of Christ Church, All Souls, St. John's, Wadham, Exeter and Corpus Christi Colleges, Oxford; to Mr. F. G. Emmison, Miss H. E. T.