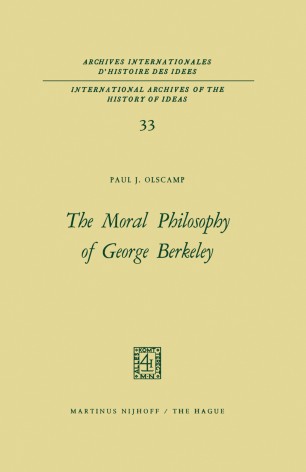 The Moral Philosophy of George Berkeley

Upon the whole, I am inclined to think that the far greater part, if not all, of those difficulties which have hitherto amused philosophers, and blocked up the way to knowledge, are entirely owing to our selves. That we have 1 first raised a dust, and then complain, we cannot see. . . . there are some passages that, taken by themselves, are very liable (nor could it be remedied) to gross misinterpretation, and to be charged with most absurd consequences, which, nevertheless, upon an entire perusal will 2 appear not to follow from them. In an effort to comply with these excellent principles of Berkeley's, I have tried to avoid complex language throughout this book, and to give all of his works the careful scrutiny he urges in order to avoid misplaced emphasis and quoting out of context. George Berkeley waS born in Dysert Castle, Thomastown, Kilkenny, Ireland, in 1685. He is among the best known of Western philosophers, but a brief sketch of the high points of his life might nonetheless be of some interest. His father William Berkeley was related to Lord Berkeley of Stratton, who was the Lord Lieutenant of Ireland from 1670 to 1672. His mother was probably related to General Wolfe, the conqueror of Montcalm in Canada. He was educated at Kilkenny School, and at Trinity College, Dublin, where he received Bachelor's and Master's degrees in 1704 and 1707 respectively.