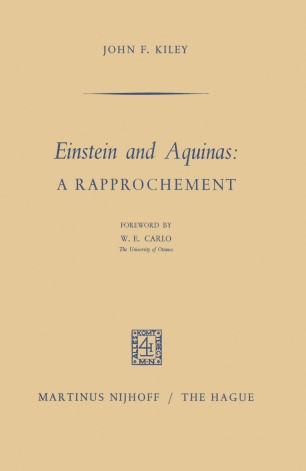 Einstein and Aquinas: A Rapprochement

Now how would things be intelligible if they did not proceed from an intelligence? In the last analy­ sis a Primal Intelligence must exist, which is itself Intellection and Intelligibility in pure act, and which is the first principle of intelligibility and essences of things, and causes order to exist in them, as well as an infinitely complex network of regular relationships, whose fundamental mysterious unity our reason dreams of rediscovering in its own way. Such an approach to God's existence is a variant of Thomas Aquinas' fifth way. Its impact was secretly present in Einstein's famous saying: "God does not play dice," which, no doubt, used the word God in a merely figurative sense, and meant only: "nature does not result from a throw of the dice," yet the very fact implicitly postulated the existence of the divine Intellect. Jacques Maritain God's creation is the insistence on the dependence of "epistemology" on ontology; man's acknow­ ledgement of creation is an insistence on the episte­ mological recovery of ontology.