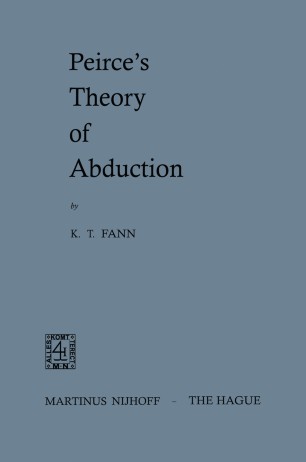 This monograph attempts to clarify one significant but much neglected aspect of Peirce's contribution to the philosophy of science. It was written in 1963 as my M. A. thesis at the Uni­ versity of Illinois. Since the topic is still neglected it is hoped that its pUblication will be of use to Peirce scholars. I should like to acknowledge my indebtedness to Dr. Max Fisch who broached this topic to me and who advised me con­ tinuously through its development, assisting generously with his own insights and unpublished Peirce manuscripts. TABLE OF CONTENTS INTRODUCTION 1. A Current Issue in the Philosophy of Science 1 2. Peirce and His Theory of Abduction 5 3. The General Character of Abduction 7 PART I: THE EARLY THEORY 1. Peirce's Earliest Conception of Inference 11 2. Three Kinds of Inference and Three Figures of Syllogism 13 3. Ampliative Inference and Cognition 17 4. Induction and Hypothesis 20 5. The Method of Methods 23 PART II: THE LATER THEORY 1. The Transitional Period 28 2. Three Stages of Inquiry 31 3. Abduction and Guessing Instinct 35 4. Logic as a Normative Science 38 5. Hypothesis Construction and Selection 41 6. Abduction and Pragmatism 44 7. Economy of Research 47 8. Justification of Abduction 51 CONCLUSION 55 61 BIBLIOGRAPHY INTRODUCTION 1.