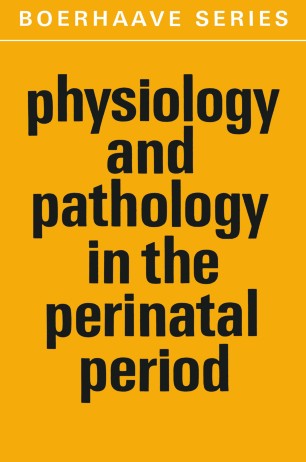 Physiology and Pathology in the Perinatal Period

The course of history is never one of smooth progression. Periods of relative quietness are interrupted by periods of wars and revolution. This pattern resembles that of a river which, before flowing into the delta, has to pass countless rapids. The same holds for the development of the science of medicine. In obstetrics some of these 'revolutions' or 'rapids' consist of the introduction of conservative obstetrical treatment by Lucas Johann Boer at the beginning of the nineteenth century, the discovery of the cause of puerperal sepsis by Oliver Wendell Holmes and Semmelweiss between 1843 and 1847, the introduction of the principle of asepsis by Pasteur in 1874, the introduction of prenatal care at the end of the nine­ teenth and the beginning of the twentieth century (Mijnlieff, Treub, De Snoo), the improvement of surgical techniques, the possibility to treat shock by bloodtransfusion, and, finally, the acquisition of new means for the effective therapy of infection. All these developments have led to a sharp reduction of maternal and perinatal mortality. In this connection it must be pointed out that such a reduction could never have been accomplished without the favourable social changes as a result of which medical and prenatal care could be made universally available. In recent years there has been another revolutionary develop­ ment in obstetrics. Two factors have been responsible for this: the ap­ plication of basic sciences in obstetrics, and the dissolution of the isolation with respect to other clinical disciplines.