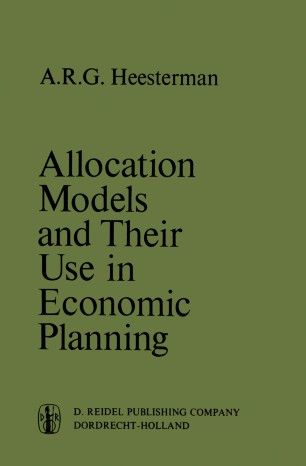 Allocation Models and their Use in Economic Planning

Part of the International Studies in Economics and Econometrics book series (ISEE, volume 3)

Three different lines of approach have contributed to the theory of optimal planning. One approach considers the problem from the view-point of a national government and its adviser, the econometrician planning speci­ alist. The government can, if this is thought to be desirable, stimulate investment in certain directions and discourage other economic activities. By various fiscal devices, it can influence both the total level and the distribution of investment funds over different sectors of production. Also, in many countries, a public agency plays some kind of coordinat­ ing role in the formulation of long-term plans for output by the enter­ prises sector; this may range from administrative direction in so-called centrally planned economies, to persuasion and advice in 'capitalist' economies. Accordingly, the public planner wishes to know what dis­ tribution of the nation's resources would be 'optimal'. This leads to the construction of various models which may be described under the general heading 'input-output type models'. This type of model has been largely developed by practitioners, among whom Sandee [B2] is probably the most outstanding and the earliest. A later, well-developed example of a model based on this approach is, for example, the Czech model by Cerny et al. [Bl]. A second approach considers the problem from the point of view of the private entrepreneur and his adviser, the manager and financial accountant.