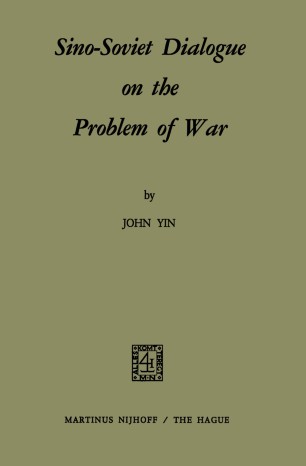 Sino-Soviet Dialogue on the Problem of War

The author has spent upwards of ten years in working on this book. His objective is to clarify the military aspect of the Moscow-Peking dialogue which has not yet received its deserved treatment. The apogee of that dialogue seems to have been passed toward the end of the rule of Khrushchev. Yet the Vietnam war spawns fresh contention. Our cover­ age will span the development from I956 to the present. The beginning of the dispute with regard to the origins of war in general is taken up in the first two chapters. The next three chapters discuss the several types of war with the frame of reference set in what now appears to be a quondam era. But the principle differences between the disputants are just as outstanding today as they were then. The penultimate chapter is somewhat wide in scope in order to deal with the larger and more intensely bitter polemics evolving after Khrushchev left office. There have been many new and startling views held by both sides since then, views splitting them poles apart. Omi­ nously at issue now is the question of Sino-Soviet peaceful coexistence. Our work, obviously, cannot wait until that question is answered to be finished. The final chapter concludes our study. To write of subjects as dynamic as this one is a challenge because they are current affairs. Due to the swift change of events, no sooner is our typescript put to press than it needs a revision.