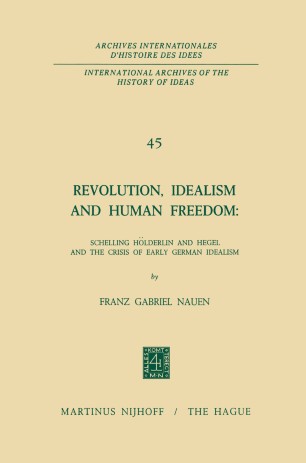 Schelling Hölderlin and Hegel and the Crisis of Early German Idealism

In this study I will present the intellectual development of Schelling, Holderlin and Hegel during their formative years. Because of their similar social origins, the early thought of these young Swabians, during the 1790's, should be treated as a unit. Their experience as roommates at the Stift in Tiibingen and their close intellectual fellowship throughout the nineties made each extremely responsive to the others ideas. As mem­ bers of the political elite in Wiirttemberg, their intellectual assumptions were profoundly affected by the crisis of Wiirttemberg and German political society and by the events of the French Revolution in a way ex­ plicable only in the light of their Swabian heritage. So, for example, seen in the context of HOlderlin's and Schelling's thinking, the genesis of Hegel's earliest mature philosophical assumptions appears to be not so much an event in the history of philosophy as a specific solution to the problems raised by the crisis of his society. The crucial role of Holderlin in the history of German Idealism should also become apparent as a result of this study. For reasons developed in the following, Holderlin's thinking bridged the gap not only between Kantianism and the new philosophy, which was to come to fruition in Hegel's mature thought, but also between the republican and the natio­ nalist phase in the history of German political thought.