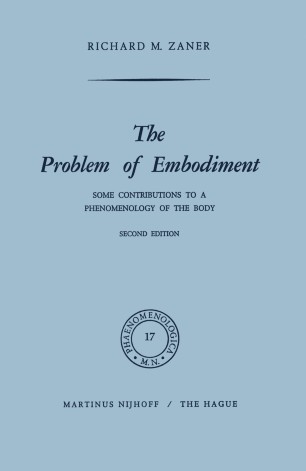 The Problem of Embodiment

Some Contributions to a Phenomenology of the Body

Early in the first volume of his Ideen zu einer reinen Phiinomeno­ logie und phiinomenologischen Philosophie, Edmund Husserl stated concisely the significance and scope of the problem with which this present study is concerned. When we reflect on how it is that consciousness, which is itself absolute in relation to the world, can yet take on the character of transcendence, how it can become mundanized, We see straightaway that it can do that only by means of a certain participation in transcendence in the first, originary sense, which is manifestly the transcendence of material Nature. Only by means of the experiential relation to the animate organism does consciousness become really human and animal (tierischen), and only thereby does it achieve a place in the space and in the time of Nature. l Consciousness can become "worldly" only by being embodied within the world as part of it. In so far as the world is material Nature, consciousness must partake of the transcendence of material Nature. That is to say, its transcendence is manifestly an embodiment in a material, corporeal body. Consciousness, thus, takes on the characteristic of being "here and now" (ecceity) by means of experiential (or, more accurately, its intentive) relation to that corporeal being which embodies it. Accordingly, that there is a world for consciousness is a conse­ quence in the first instance of its embodiment by 2 that corporeal body which is for it its own animate organism.