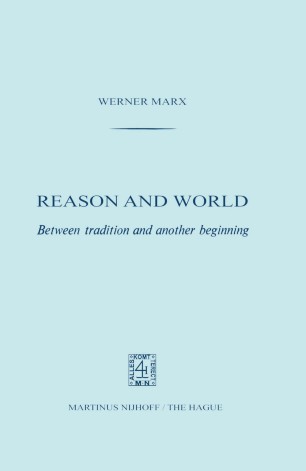 Between Tradition and Another Beginning

At a time when the traditional principles of many fields have lost their power and validity, the task of philosophy may well be to look back at these traditional principles and at their inherent determinations and basic problems, while heeding every indi­ cation of a transition to something new, in order to be critically open for all attempts at "another beginning. " A philosophizing which thus sees its proper place "between" tradition and another beginning has grasped its own basic dilemma: It remains in search of the true even though it has no valid concept of truth. A concept truth grounded solely in transcendental subjectivity convinces of it no longer, and the essence of truth as it "occurs" for experiential understanding has not yet been sufficiently determined. A phi­ losophizing which has understood itself in this way will not want to commit itself one-sidedly to one position or the other. Instead it will consider its task to lie in keeping thought in flux. The present collection of essays may be understood as an ex­ ample of such a conception of present-day philosophizing. Thus the first essay isolates the guiding thoughts of the traditional philosophy of reason and spirit as they fulfilled themselves in German idealism, in order to make the traditional concept of truth visible and to bring to light those basic determinations formed in certain contemporary philosophical tendencies which are either related to it or altogether new.