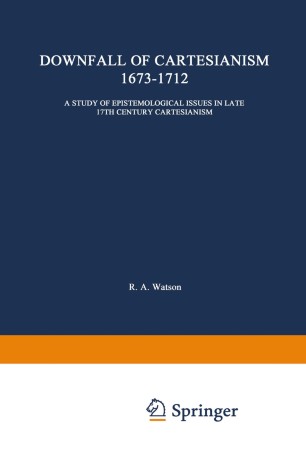 A Study of Epistemological Issues in Late 17th Century Cartesianism

Phenomenalism, idealism, spiritualism, and other contemporary philo­ sophical movements originating in the reflective experience of the cogito witness to the immense influence of Descartes. However, Carte­ sianism as a complete metaphysical system in the image of that of the master collapsed early in the 18th century. A small school of brilliant Cartesians, almost all expert in the new mechanistic science, flashed like meteors upon the intellectual world of late 17th century France to win well-deserved recognition for Cartesianism. They were accompanied by a scintillating comet, Ma1ebranche, the deviant Cartesian, now remembered as the orthodox Cartesians are not. However, all these bright lights faded upon the philosophical horizon, almost as soon as they appeared. The metaphysical dualism of Des­ cartes was, as such, neither to be preserved nor reconstructed. There are many reasons why the Cartesian system did not survive the victory over Scholasticism which Descartes, Malebranche, and the others had won. Newtonian physics very soon replaced Cartesian physics. The practical interest and success of the new science which the Cartesians themselves had nurtured drew men down from the lofty realms of metaphysics. On the popular front, Cartesianism was attacked and ridiculed for the view that animals are unthinking machines. In the schools of Paris and elsewhere, there was the general but severe opposition of pedants, which is perhaps of more historical than philosophical interest.