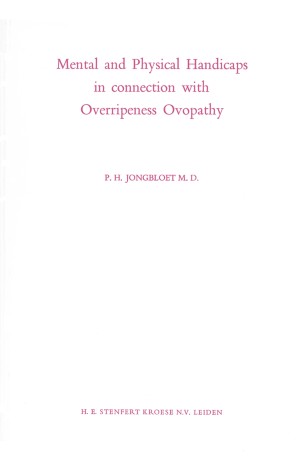 Mental and Physical Handicaps in connection with Overripeness Ovopathy

Parents of children born with mental or physical handicaps, tend to face the physician with questions about the origin of the abnormality concerned and the chance of having another child with the same condition. The physician then finds himself in a difficult situation since the causes of the majority of congenital abnormalities remain as yet unknown. In most cases he has to restrict himself to a mere enumeration of the signs and symptoms encountered or, at best, to a classification of the syndrome at hand. Efforts are frequently made to connect both the somatic aberrations and the mental deficiency with complications during the later stages of pregnancy, at the time of delivery or in the immediate postnatal period. However, a careful search for such items as abnormal dermatoglyphs, or 'degenerative stigmata', and, in particular, a post-mortem examination of the brain, often indicates that the handicap concerned should be ascribed to factors operating long before the time of birth. Theoretically, the causes of abnormalities present at birth can be listed as of a genetic, germinal or peristatic nature. During the past decades special attention has been paid to both genetic and peristatic factors. The purpose of this thesis is to stress the importance of germinal factors, in particular those which, at least in theory, might lead to disturbances in the ripening process of the human egg. We were put on this track by some data concerning the circumstances under which one of our patients presumably had been conceived.