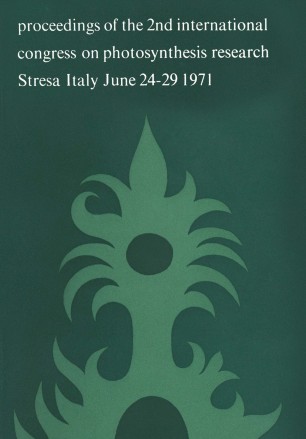 Photosynthesis, two centuries after its discovery by Joseph Priestley

The Second International Congress on Photosynthesis Research took place in Stresa, Italy during June 24-29, 1971; two centuries after the discovery of Photosynthesis by Joseph Priestley in 1771. This important anniversary was celebrated at the Congress by a learned account of Priestley's life and fundamental discoveries given by Professor Robin HILL, F. R. S. Professor HILL's lecture opens the first of the three volumes which contains the contributions presented at the Congress. The manuscripts have been distributed into three volumes. Volume I con­ tains contributions in the areas of primary reactions and electron transport; Volume II ion transport and photophosphorylation, and Volume III carbon assimilation, regulatory phenomena, developmental aspects, and from the two special sessions of the Congress devoted to evolution and photorespiration. It is realized that this division is necessarily somewhat arbitrary since many contributions relate to more than one of the above mentioned titles. However, the large number of contributions (over 3000 typed pages) made it impossible to publish the proceedings in less than three volumes. The printing of these volumes and the organization of the Congress were made possible by a contribution from the Consigio Nazionale delle Ricerche of Italy. The generous support of the Istituto Lombardo Acca­ demia di Scienze e Lettere to the publication of these proceedings is gratefully acknowledged. The editors wish to express their appreciation to all the scientists who contributed the results of the investigations, for their coopera­ tion; and to Drs.