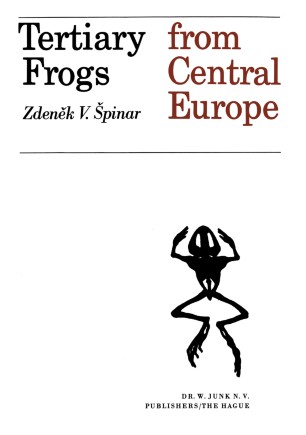 Remains of fossil frogs, elsewhere scarce, have been found abundantly for more than one hundred and twenty five years in the Tertiary deposits in northern and western Bohemia. In most cases they are imprints of complete skeletons or their parts poorly preserved in carbonaceous claystones, and difficult to interpret. A new locality of Tertiary diatomites that has been discovered in 1950 in northern Bohemia, not far from the town of DMin, is Bechlejovice. This locality yielded very interesting material: in addition to innumerable leaf imprints, frequent frog-remains were so excellently pre­ served that they made possible studies not only of skeletal parts but also outlines of muscles, organs, blood vessels, nerves, pigments, some cartilages, glands, etc. Up to now, numbers designating remains of adult individuals have totalled 1,100, besides 80 palaeobatrachid tadpoles. There were also found seven adult specimens and more than 60 tadpoles of pelobatids. Nor should be omitted other localities in Bohemia (see below) which furnished new material and thus much new information. Examinations made on the new finds necessitated revision of earlier collections deposited at the following Institutions: The Department of Palaeontology of Charles University, Prague; the National Museum in Prague; the State Museum for Mineralogy and Geology, Dresden; the Palaeontologic Institute and Museum of Humboldt University, Berlin (East Germany); the Institute for Geology and Palaeonto­ logy of Martin-Luther-Universitat, Halle-Wittenberg, DomstraBe 5, East Germany; the British Museum (Natural History), London.