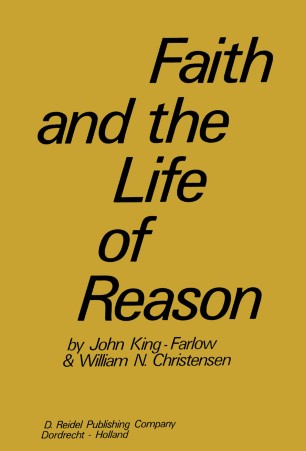 Faith and the Life of Reason

This book brings together ideas and materials which we have discussed together over the years as friends and colleagues. We draw on four papers published by us both as co-authors and on several more papers published by King-Farlow alone. We wish to thank the editors and publishers of the following journals for permission to make use of matter or points which have appeared in their pages in the years indicated: The Philosophical Quarterly (1957, 1962, 1971); The Thomist (1958, 1971, 1972); The Inter­ national Philosophical Quarterly (1962); Theoria (1963); The Southern Journal of Philosophy (1963); Sophia (1965, 1967, 1969,1971); Philosoph­ ical Studies of Eire (1968, 1970, 1971); Philosophy and Phenomenological Research (1968); Analysis (1970); Religious Studies (Cambridge University Press, 1971; we acknowledge a debt to H. D. Lewis, Editor, on page 20). This book is not, however, a collection of reprinted articles. It is a continuous work which deals with a vital cluster of problems in the philosophy of religion. In this work we attempt to utilize both our earlier thoughts, often considerably revised, and our very recent ones in order to argue for the good sense and rationality of making certain strong forms of commitment to some basic elements of primary wisdom in the Judaeo­ Christian tradition. While pursuing the investigations which have led to the writing of this book we have found ourselves becoming indebted to many individuals and institutions.